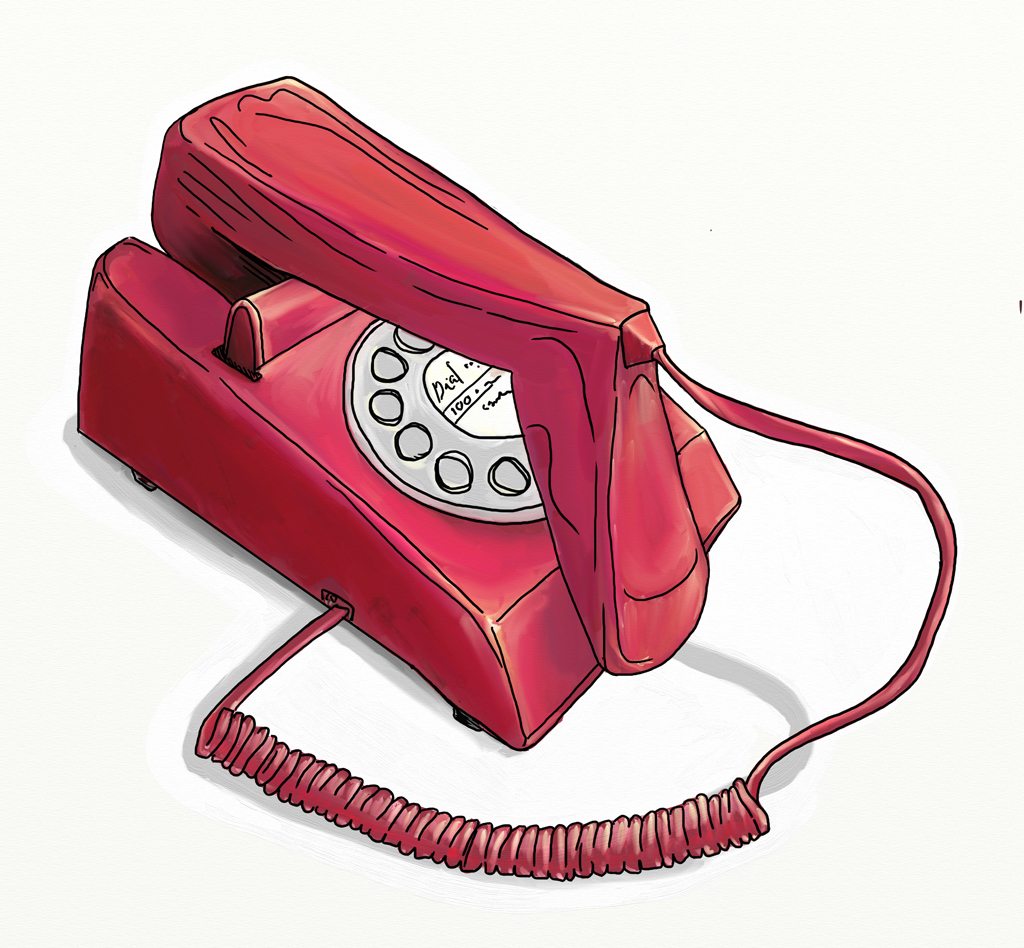 I painted this bright pink/red 1970s style phone in ArtRage 4 which has an excellent new painting mode called ‘workbench’. Workbench puts all the tools you need into a strip at the top of the screen. I took the idea for this piece from my sketch book, traced the outline and have been painting it up using the ink and oil brush.

I love last centuries old landline phones, each design speaks volumes about it’s time. This is a ‘futuristic’ 1970’s style phone. So expect more in the coming weeks.

This is to be the last post at guthriewatson.wordpress.com after some years I’ve decided to shift my blog and create a portfolio illustration site at…

I’ve owned this URL for a while and decided it was time to push forward make a better promotional platform and outlet for my illustration work.

It uses a custom self hosted setup of WordPress which means I can more easily update the main web site and manage the blog in a familiar environment. Which should mean more time for image making. It also means that the website and blog are configured for viewing on phones, tablets and laptops without lots of extra shenanigans and publicising new work is a breeze.

It’s been busy times in the last month but I thought I should post some recent work.

I’ve recent updated to CS6 and rediscovered Illustrators gradient mesh tool. The gradient mesh tool is amazing for this type of subject, allowing colour variations that show both reflective light as well as light passing through the pepper.

A red pepper in 9 illustrator paths

Some quick photo’s from the Bow Arts Open Studio Event held over the last month. For some this is a time to sell work for me it was more a report card and reflection on where my new portfolio is and an opportunity to show some of the work I’ve completed so far.

If I’m still at the Bow studio next year I’ll definitely get some helpers as I didn’t get to see nearly enough of the work on show.

It’s a lot more work than you think and really pushed my practice forward and made me stop and think about where I’m at. A useful point of reflection.

Catcher In The Rye cover illustration for the Forbidden planet competition.

Forbidden Planet have now put up all the entries and I love the diversity of the work presented. There really is some very different and interesting approaches to the challenge.

So for those who’ve missed the discussion Forbidden Planet has been running a competition in the last couple of months to showcase what London illustrators can create in terms of book covers after some less than complimentary comments in Melanie McDonagh article in the Independent earlier this year.

The discussion about modern illustration went something like this.

Starting with the original article by Melanie McDonagh back in January.

Personally I just think some individuals are living in a bubble, don’t look beyond there own network of connections and frankly a lot of very lazy journalism is churned out. Sadly this is one such example.

She had some very salient points, especially for me, the idea that good illustration is not about drawing accurate portrayals it’s about visually encompassing the idea of a text in a way that makes it enticing to a potential reader.

Finally Forbidden Planet weighed into the debate and set a competition to show the diversity and ability of London’s illustrators.

Perhaps we as readers and artists need to challenge publishers the world over to commission more illustration from the amazing pool of talent instead of using stock photography as the default. Just a thought.

I learnt a lot from the process of producing this years Sketchbook Project work. For those not aware the Brooklyn Art Library in the US runs the project every year. The basic idea is to fill up an empty sketchbook with creative energy. You can see other examples in the digital library.

This was the first piece I worked on when I moved into my BowArts studio and seems to have taken the longest to finish.

I’m fascinated by space travel and the stark reality of how long it will be before we truly start travelling any substantial distance.

The Monthly recently ran an article about just such possibilities The Stars My Destination by Luke Davies (sorry you can’t see it all here unless you are a subscriber.) The 100 Years Starship website gives you a bit more information. The British Library exhibition from last year Out Of This World also inspired me seeing all the old books and ideas, fascinating.

Sketches to inspire me to find that perfect studio space…

This one I started to work into a proper Photoshop painted image as I just love the bulky steaminess of it.

Unlike many of my fellow illustrators I find it almost impossible to work at home and not just because I’ve no space.

Making drawings and paintings with a mixture of digital and traditional methods means I need somewhere I can sprawl and leave it set up.

These are just a few of the recent roughs I’ve been sketching up – mostly in cafes, on the bus or anywhere other than in the house.

They are a joy but I find the distractions of home too much so here’s to finding an affordable work space for my art.

Emily Barker and the Red Clay Halo sketched at Guildhall as part of the City of London Festival  last week, more brilliant Australians.

Sketching people is great and but it was quite a challenge as they swayed and played so it took a lot longer than other public sketchyness does.

Again I think some of the quick sketches get more but looking at the 45min rendered pencil drawing it’s definitely got some good points.

Thought I’d start posting pieces drawn in the life room to try and motivate myself to do more to get some illustration work.

Short sketch from the long pose.

30 minute sketch from the last pose of the session.

30 minute pose from the first half of the session.

I’m always refining and trying to work more into the longer poses and each model has there own unique challenges. This model had a really lovely curvaceous figure.

I think sometimes you need to find something that really appeals to you about the pose or model to get a good image.

This banner is part of a set of illustration and design work that I did for Crafty Foxes new blog.

We are still adding more elements so it’s just the general look and feel with more to come in the new year.

This is the poster that I designed and illustrated to set the mood for the rest of the work.

I decided it would interesting to try and limit the colour palette and use screen printed style colour blocks.